The pharmaceutical lawyers at Charlip Law Group, LC are evaluating injuries suspected as being caused by the Zostavax vaccine. Zostavax — manufactured by Merck & Co Inc. Pharmaceuticals — is a vaccine designed to reduce the risk of contracting shingles, an infection that results from a dormant varicella-zoster virus reactivating in the body. Shingles, herpes zoster virus, is the second phase of a two-part infection; the initial phase being the contraction of varicella (chickenpox). After chickenpox runs its course in the body – usually during childhood – the virus remains in the spinal cord and brain, lying dormant for years and even decades. The virus reactivates and reappears later on as the shingles virus, a full-body rash characterized by blisters on one side of the torso, sharp shooting pains, and weeks’ long discomfort.

Since the shingles vaccine is not administered to children, it’s not covered by the National Childhood Vaccine Injury Compensation Act. Injury claims, therefore, do not go through the National Vaccine Injury Compensation Program (NVICP) before going to court. A Zostavax lawsuit multidistrict litigation has been filed on behalf of any individuals who received the Zostavax vaccine and subsequently contracted shingles or a number of other adverse effects.

THE CDC’S STATEMENTS ABOUT ZOSTAVAX

The CDC advises that your risk of shingles and postherpetic neuralgia (PHN) increases as you get older. CDC recommends that people 60 years old and older get shingles vaccine (Zostavax®) to prevent shingles and PHN. Shingrix (recombinant zoster vaccine) is the preferred vaccine, over Zostavax® (zoster vaccine live), a shingles vaccine in use since 2006. Zostavax may still be used to prevent shingles in healthy adults 60 years and older. For example, you could use Zostavax if a person is allergic to Shingrix, prefers Zostavax, or requests immediate vaccination and Shingrix is unavailable.

The CDC also explains that Zostavax (zoster vaccine live) was licensed by the FDA in 2006. This vaccine reduces the risk of developing shingles by 51% and PHN by 67%. It is given in one dose as a shot, and can be given in a doctor’s office or pharmacy. 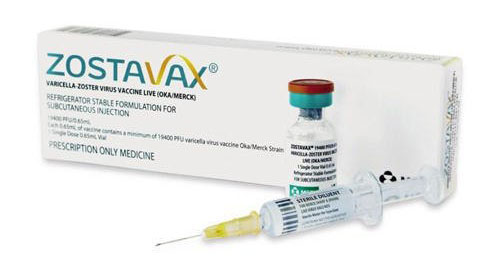 The CDC recommends that people 60 years of age or older should get shingles vaccine (Zostavax). They should get the vaccine whether or not they recall having had chickenpox, which is caused by the same virus as shingles. Studies show that more than 99% of Americans aged 40 and older have had chickenpox, even if they don’t remember getting the disease. There is no maximum age for getting shingles vaccine. Even if you have had shingles, you can still receive shingles vaccine to help prevent future occurrences of the disease. There is no specific length of time you must wait after having shingles before receiving shingles vaccine, but generally you should make sure the shingles rash has disappeared before getting vaccinated. The decision on when to get vaccinated should be made with your healthcare provider.

The CDC says that Zostavax is approved by the Food and Drug Administration for people aged 50 years and older. However, CDC does not have a recommendation for routine use of Zostavax in people 50 through 59 years old. Protection from this shingles vaccine lasts about 5 years, so adults vaccinated before they are 60 years old might not be protected later in life when the risk for shingles and its complications are greatest. Adults 50 through 59 years who have questions about shingles vaccine should discuss the risks and benefits with a healthcare provider.

Since 2006, the FDA has added additional warnings to Zostavax prescribing information as a result of reports of health problems. In August 2014, the FDA required an update because the vaccine was found to actually cause shingles in some people.

The National Vaccine Information Center (NVIC) has also reported that between 1990 and September 1, 2015, there were 1,141 serious adverse events reported to the Vaccine Adverse Events Reporting System in connection with the shingles vaccine. Over 33 percent of those occurred in seniors 65-75 years old. In a total of 90 of those events, the patients reportedly died.

The FDA required another Zostavax warning to be updated in February 2016 to include an eye disorder called necrotizing retinitis. There also have been various medical journal reports and studies that have reported that Zostavax could cause keratitis, a condition that can lead to scarring and permanent vision loss. Patients with suppressed immune systems were particularly at risk.

The Zostavax vaccine has been associated with certain serious side effects, that include, but are not limited to:

If you have been administered the Zostavax vaccine and suffered from any of these side effects, you may be entitled to compensation for your injuries, lost wages, medical bills, pain and suffering, and other losses. Contact the experienced Zostavax lawyers at Charlip Law Group, LC to file Zostavax lawsuit on your behalf. There is no fee unless you receive a settlement or award. For a free (no obligation) case evaluation, call our firm today at (305) 354-9313 or fill out our online contact form.

Zostavax lawsuits have been filed across the country alleging that the Zostavax caused serious side effects, including the development of shingles and chicken pox. Plaintiffs allege that they were never warned about the potential risks associated with the vaccine and that they may have elected not to have the vaccine if they did know they may develop these side effects. Plaintiffs claim that Merck knew of these serious risks but did not provide adequate warnings. Furthermore, many of the lawsuits allege that Merck knew that the Zostavax was only effective half of the time but continued to market the vaccine as a safe and effective way to prevent shingles. Due to the number of lawsuits filed, the Judicial Panel on Multidistrict Litigation ordered that the Zostavax lawsuits be consolidated into multidistrict litigation (MDL) on August 2, 2018.
Sources:

What our clients are saying